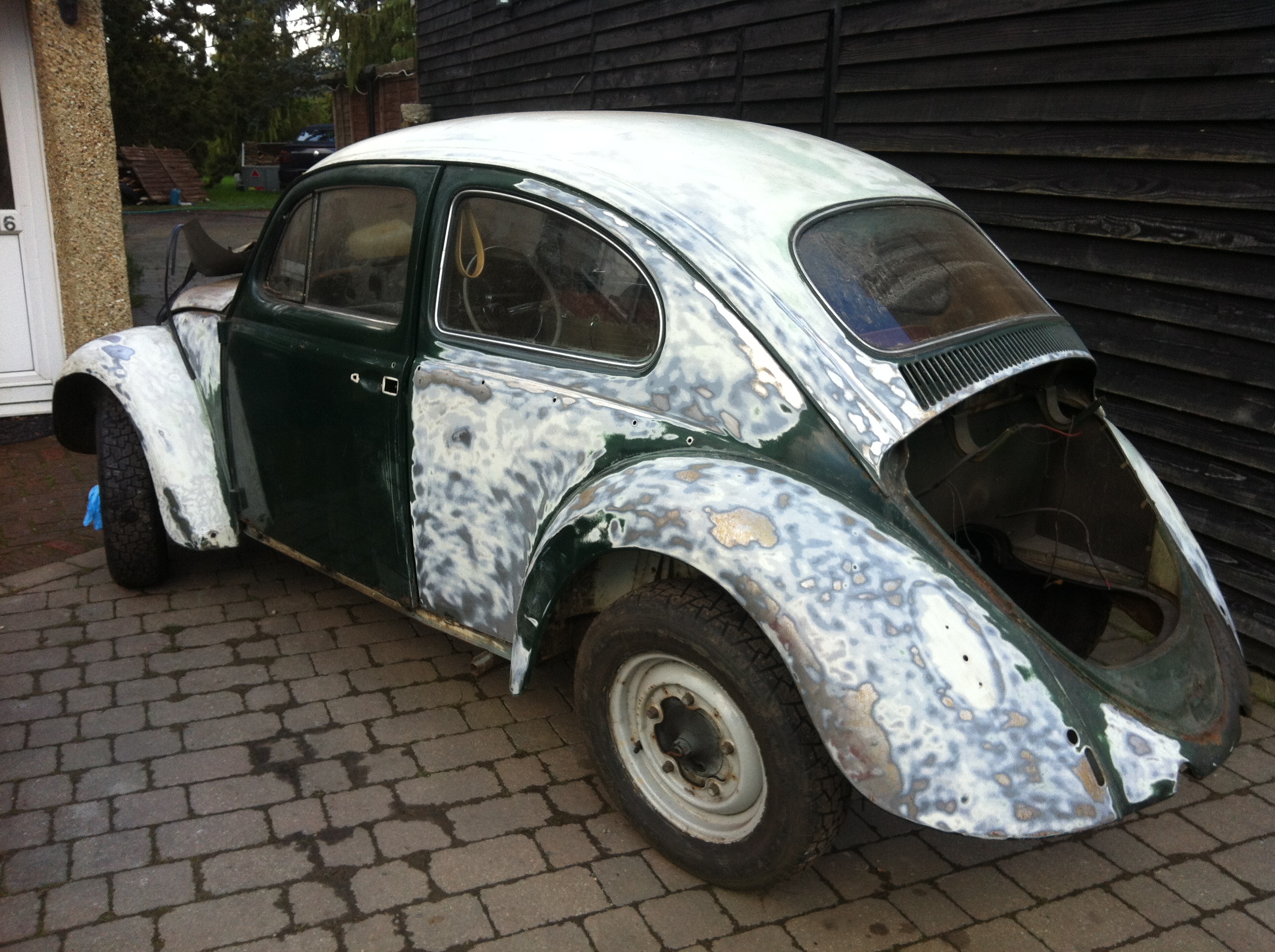 Parked in 1980 and buried in a Garage beside a house.

Not really a barn Find, but a garage find...

Its had one owner from new.

I went to look at it on the Sunday of Volksworld Show 2012 as it was just up the road - Someone had asked on our local VW forum for a valuation, no one responded so I said I would help.

Turned out the car was in Surrey so visiting whilst at Volksworld show made sense.

I couldn't help but buy it.

The under side is covered in surface rust - but i couldn't see any holes - although, its hard to see it all as its on flat tyres and the garage is a bit full..

I was told that it broke down and was limped into the garage in 1980...

It had been covered in "stuff" which was all cleared out before we got there...

I collected it later that week... .

On removing it from the dark garage it became obvious that it was originally white.

The lady who was selling on behalf of her late husband had no Idea it had been painted when I asked her about the paint the other day... but it appears it was done before they met.

Also in the paperwork it says it was white from new. .. oh and then I found a receipt for about £50 in 1972 for the full inside and out respray that tells the story too... sadly the paint is Horrible...

It appears to have its original purchase receipt, all UK MOTs, all UK Tax Discs, Original Disc from Belgium. All the hand books and more...

The car is surprisingly solid - But battered.

The brakes even work as do the lights and wipers...

I've poured diesel in the bores to see if it will un-seize, but don't hold out much hope.

His only owner was called William... so That is now the cars name.

The car was ordered in RHD form for import to the UK at a later date... Strangely no one thought to order a MPH speedo!

Here are a few more photos ...

its a long process...

The engine has had plenty of diesel own the bores but wont budge...

So after the LA GODs Meet the other day, Team "blow-Torch" arrived one by one.. showing their tool at the door as they arrived.

Then headed for the garage. We heated the cylinders, Hit it. Coaxed it. Hit it again. drank more tea. More heat, more hitting.... and after a lot of laughing and hitting we eventually started to get it to move...

We left it with the barrels about an inch or so up the pistons... none of them have released... but they are slowly moving.

They are doused in more diesel to see if they will release...

Thanks to team "blow - torch" - Dave, Richard and Adrian

They have come apart at last..

I think its just time that had made them stick... they are mucky.. but not rotten... hopefully they will clean up ok.

There is surface rust on the rods so will take it all apart and see how bad it is..

After selling my life long '64 bug....its time to concentrate on this one...

So I took the bits out of diesel and cleaned em... and started splitting the case...

Its not very nice in there..

Crank bare and cleaned... theres no scoring... but there are a few marks / stains - surface is smooth on bearing faces

The engine was low mileage before parking up and then seizing over the 38 years..

(all oiled to stop any further surface corrosion)

Case half cleaned - and all oil ways blown through... I was covered in spatter!

Oil pump cover looked worse than it was..

Most parts are not appearing very worn, just corroded after 38 years standing..

I've fitted the rings too..

Time to start cleaning the heads...

Measuring to check for stretch in the valves...

Heads back together .. all the original parts

Put case together and heads on, measured endfloat and fitted clutch.

Meanwhile, the seats have been to Pete from Delux interiors. He usually does full re-trims, but has stripped and replaced the beading on these. They look amazing - THANK YOU PETE! - http://www.deluxvwinteriors.co.uk/

I've given them a clean too... with pruple clean obviously...

It is a 1200 exhaust stamped with The VW logo and is heavy. With good looking (possibly genuine) tail pipes - It is egg Shape

I need to investigate a bit further and work out which of my Early 60's cars it will suit the most...

A slight delay and it is November 2015...  stripped and more bodywork time..

This message was found by the fuel tank Nur Ruhig Blut! Written by some one in the VW factory in 1962... Keep your hair on? Calm down?

Time to wrap it up and take it outside...

The worst rust on the car so far...