"Fame & Fortune" - But probably neither.

Volkswagens in Film and on TV.

Here are a few pictures of a few of my cars out and about "on set" in the movies and on the telly.

Over the years I have been invited to provide cars (Volkswagens) for different films and TV programs and photo shoots..  as I am obsessed with old Volkswagens, I usually have a selection of old VWs that I can supply for film work. Some are divas and enjoy the fame.

Here are a few I have been involved in..

A few stills from the above -

This version has the Bay window on its own - https://www.youtube.com/watch?v=Zk2SLzoAfSg

We spent a day and a half in site selling one of our project Beetles to Paul and Dave from the TV Program "Turbo Pickers" ... We met them at the lovely Southill Village Stores and Tea rooms and showed them one car and later sold them another. The Car we sold looked rough, but was actually very solid underneath and had in recent years had the floor pan repaired and powder coated and also replacement heater channels. 1600 Engine and twin carbs. They took it away and painted it and made it pretty for the show which aired for the first time on Discovery on Monday 8th December 2014 (episode 2) - some of these pics are phone pics and some are still from the Program itself - go watch it!

Filming at Rockingham Raceway ....   2 days in the sunshine - with a VW Campervan 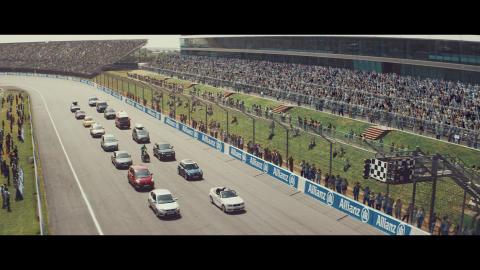 The beetle had a roof rack fitted and then loaded up with bags, the student was then seen filling the car with more junk and driving off to College with her parents waving her off from the front door...

You should be able to see my Gold 1303s and myself (playing dad) from the end of November 2009 on Livingit TV.

The Split Screen camper is called Cyril and is a RHD 1967 tin top and is usually black and white.

Here he is before they got their hands on him -

These are during the make over at Charterhouse school in surrey. - (July 2009)

And here he is after -

Here are some pictures taken in the grounds of Knebworth House in August 2009 during filming of the return to school scene..

If you have seen the bus out and about, please send us your pictures - parts@partsemporium.co.uk

Poor Cyril is having a hard life... now they want to take out his windscreens so they can film through the bus... looks like some Safaris are on the cards!

A Day on Set at Ealing Studios - windscreen cut out... filming a short scene inside the camper

Later in the year I will post up some pictures of the filming and some Celebrities with The Hippy Bus!

Here is the St Trinians VW Bus at some local VW club meets and VW Action 2009...

The film is due for release in December.